About us > News from PSI > Article 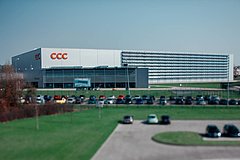 The CCC Group – the largest footwear retail company and manufacturer in the CEE region has contracted PSI Polska to deploy the PSIwms warehouse management system in its logistics centre.

The CCC Group operates a retail network of over 900 stores in 18 countries in Europe and beyond, with the floor space of more than 0.5 million square meters. Through its subsidiary eObuwie.pl S.A., CCC is also the leader of CEE’s footwear e-commerce business. With the headcount of over 12,000 employees, the Group sells more than 40 million pairs of shoes annually, with plans for opening 100 new stores every year. Obviously, the company’s solid growth would not be possible without major investments in logistics. In 2018, CCC is looking at breaking the new record of 100,000 pallets in its warehouses. Against the backdrop of the company’s expansion plans, efficient operation of its distribution centre, involving automatic warehouse processes and innovative IT tools, is of critical importance.

PSIwms will automate CCC’s logistics processes related to the receipt and release of goods, order picking and delivery tracking,  facilitate the adjustment of CCC’s warehouse processes to on-going business developments, and boost their efficiency and transparency. The software is already in place at one of CCC’s warehouses as part of a pilot project implemented in December 2017. After a successful pilot deployment, the company’s Management Board gave the green light to the rollout of PSIwms in other warehouse locations.

“In keeping with our strategy, CCC will bet on investments in IT systems to support our future growth. To that end, we have reviewed the leading WMS systems and decided to rely on PSI’s solution”, said Mariusz Gnych, CCC’s Vice President. “Given the quite challenging deployment deadlines coupled with the company’s digitalisation in virtually all areas of our operation, we needed a reliable and trustworthy supplier of the new warehouse management system. We are confident that PSIwms will support our business operations best. PSI’s state-of-the-art technologies and extensive experience of their deployment team will help us streamline our logistics processes and continue with market expansion”.

Piotr Picyk, Sales Director at PSI Polska, adds: “CCC is PSI’s major business partner and we are thrilled to be involved in the on-going development of the CCC Group’s logistics muscle. The choice made by CCC proves once again that PSIwms is an excellent choice for large and mature organisations with complex logistics processes. We are happy that CCC gave a go-ahead to PSI, recognising the skills of our consultants and the innovative nature of PSIwms. The main phase of the project is to be completed by the end of 2018, including the support modules for key warehouse processes and integration with the ERP system, the solutions applied by courier firms, and the complex automatic warehouse control system (which covers a number of sorters and a mini-load box storage system). After completion of stage one, the system will be optimised and extended to include other processes, such as e-commerce.”

The contract with CCC is yet another major deployment of PSIwms in the past several weeks. In December 2017, PSI Polska signed a contract for the rollout of PSIwms across the Empik Group, and the Fiege Group decided to deploy PSIwms in January 2018.